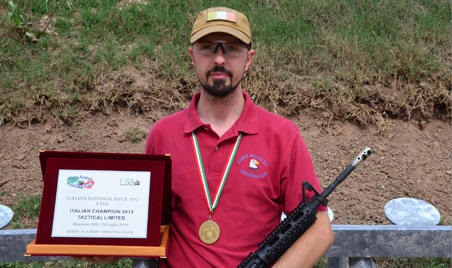 THE ORIGINS
Turfer was founded back in 1976 from the metal mechanics passion of founder Giancarlo Turelli. Over the years, targeted investments and precise market choices have led the company to the top of its sector. Flexible production and constant attention to technological innovations have been the company's priorities. It is located in the province of Brescia, a town famous the world over for weapons manufacturing and the site of some leading brands in the field, such as the legendary Beretta of Gardone Valtrompia.

PASSION FOR ARMS
At the beginning of this century Luca Turelli, son of Giancarlo, started becoming passionate about weapons and shooting and it was this passion that would later intersect with the family's professional skills, leading to the creation of Turelli Tactical Arms in 2009.
While practising his favourite sport, Luca realized that the performance of his weapon could be improved by mounting a more highly performing compensator than the stock standard, and then, having the skills and technological equipment necessary, he started to design a new compensator model: this is how Gladio and the brand T.T.A. came about. The product was an instant success with enthusiasts, which gave him the idea to start real production, also supported by the recent introduction into the RIFLE contest circuit, which is constantly expanding. In 2012 Luca Turelli graduated as the Italian Champion in the category for Rifle Tactical Limited.

T.T.A. AND THE GLADIO LINES
Thanks to the collaboration with some national military units, n 2012 T.T.A. (acronym for Turelli Tactical Arms) obtained the NATO CAGE CODE, which qualifies the company as an accredited military purveyor. Very quickly T.T.A. became the standard for all shooters looking for a compensator capable of guaranteeing superior performance. We were the first to believe in this market and the first to offer a truly complete range of compensators for every requirement and for every weapon system on the market today.
Two large lines stand out from our production:

T.T.A. is synonymous with research, development and quality. These are the words that distinguish and characterize our products.
Tel: +39.030.7254063
Nuova Tur.Fer. Srl
web agency